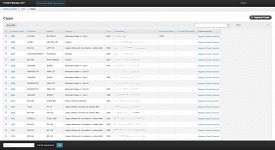 As part of a major renovation of their inner processes, the Team at Ferelli's needed to rethink completely the way, that warehouse inventory and maintenance logs were handled, in order to move towards a completely paper-free system.

This ambitious plan (the company services hundreds of hoods and cabins per month, and the transition from a 100% paper-based to a cloud-based solution had to be organized so to minimize the resulting overhead) was handed in the hands of Recursive in July 2017, when, after two meetings only, a detailed plan was laid down, in order to fully complete the migration to a newly designed digital system, by January 2018.

The work began right after the summer, and remarkably, every single milestone was hit with even slight advantage, on the planned road map. The deployment of the application was performed in a way which allowed all the members of the team, to be trained on the new platform, as well as to provide their insights, on how to optimize and fine-tune the entire process, resulting in an extremely practical and sleek user interface, which allows to perform tasks in minutes, which would have taken hours without its employment.

The application is built on top of the Django stack, and uses PostgreSQL as the main database engine. It features PDF export capabilities and automatic daily and weekly backups to prevent data integrity.